The Feedback Wall - Complaints, Compliments & Conversations with our Users


In August 2016 I was asked to lead a project into the development and implementation of a ‘Feedback Wall’ - a board in the entrance to the library that is there for our users to write their comments/thoughts/queries to us on and, in turn, for us to respond to them however we see fit. Here’s a rundown of the whys and wherefores of the project and where we’re at now.


So why, oh why, did we do it?
It’s simply just an additional way to engage with our users alongside our more established feedback channels  - comments cards, email, social media etc - and as much as I’d like to say it’s a new earth-shattering idea that’s about to revolutionise the industry...It’s clearly not. Other academic libraries have been using similar techniques to gain insight and feedback about what people think of their services/products for years (I was spoiled for choice just with a quick google) so while we may have been late to the party - it was important that we didn’t miss it altogether.

The setup is pretty easy; our users grab a pen from reception, write down their thoughts and an Information Assistant (IA) acknowledges and/or responds on a daily basis. To differentiate between user comments and our responses users write in any colour, we respond in black only. The IA takes a photo of this exchange using and uploads it to a shared folder for use at a future date. When the board gets full, an IA will erase the oldest reponses to make way for new ones. Job done; the wall went live on Sep 1 2016.


The good
It’s almost too obvious to mention (but I will); we get an awful lot of lovely comments, and in a world where everyone is so quick to tell us when something is rubbish it’s really nice when users feel compelled to tell us when it’s good – one of the nicest things that’s started to happen is the suggestions for improvement:

There is a remarkable lack of offensive material or defacing the wall. Lord knows it’s an act of will for me not to do a juvenile and childish scrawl on it every time I pass by but the students are much more grown up than me. We do get some curious comments (more of that later) but on the whole, it’s all kept above board. 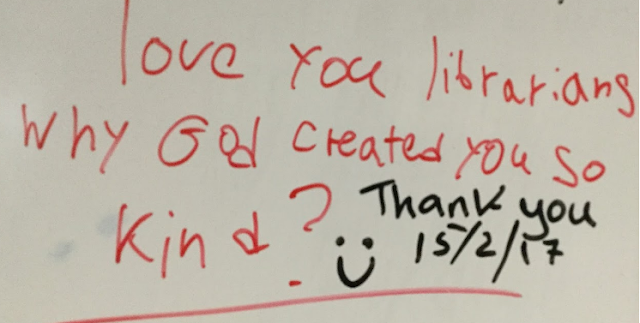 Ah, the power of a bad review should never be underestimated; we also get a few not so great comments, but, reassuringly, I’m yet to see one that pertains to the staff. However, while it’s wonderful that staff care about our services enough for negative comments to affect them, we do need to keep it in perspective - the good far outweighs the bad...and, quite honestly,  most of the comments have been about other student behaviour, the space or ‘value added services’ e.g. the costa coffee or vending machines not our core services or resources. 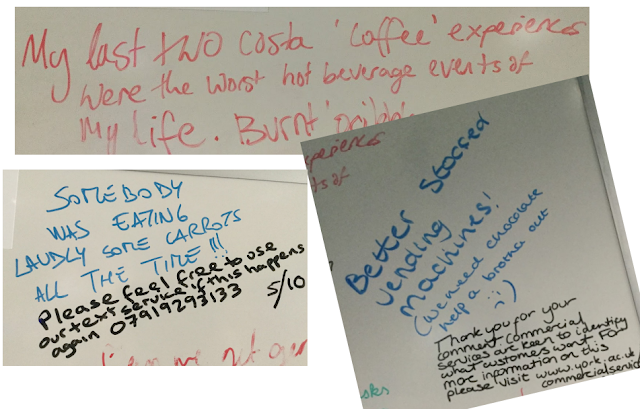 It can also be tiresome for staff to repeat the same thing, particularly things that aren’t going to change. However, these things come in waves and we have set up a Feedback Wall FAQ wiki page to help with some stock answers  for those pesky repeat-offenders. 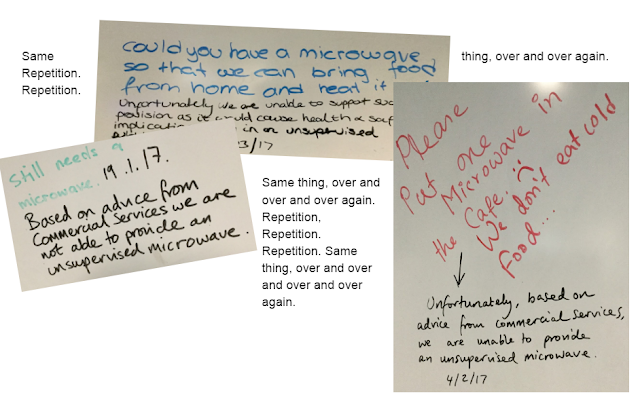 The ugly...well, the interesting bits really; stuff we hadn’t thought about…

You’ve created a monster!
It’s popularity! It’s a bit of a victim of its own success. It’s clearly a hit with our users and what I’ve found really interesting is the level of engagement with an analogue medium in a digital world. Maybe there’s a visceral satisfaction in actually physically writing the words in your own hand, maybe because it’s anonymous but immediate (unlike comment cards - where we ask for contact details and get back in touch), maybe it’s just a novelty - in a world of online commentary, is the ‘retro’ nature of the feedback wall actually refreshing and inviting to a generation raised on a steady diet of click-bait, meme-ery and  twitterature? Who knows...but whatever the reason it’s taken off quicker than Usain Bolt and Ballyregan Bob* in race to the last Mcnuggets (other nuggety treats and their respective purveyors are available) **.


One Feedback Mechanism to rule them all.
It’s had quite a significant impact our traditional forms of communication with users and has become the primary source of our feedback, which I certainly didn’t really consider  - we have recorded all these photos in these folders without really going much further at this point or extrapolating meaningful data/themes out of it so it’s had implications in not just in how we record feedback but more importantly - what we do with it.

We’re all mad here, Alice...
They do love to put some out there stuff up there but that’s actually a really nice unexpected side-effect. The very fact that our community of users are comfortable enough to ‘bants’ (I believe that’s the technical term) with each other and us is a great thing. It helps break down any perceptions of an adversarial relationship between staff and students and builds on us developing a community and culture of approachability and inclusiveness.

We’re gonna need a bigger board...
So what next? Well, it shows no signs of slowing and there’s no going back now so is there a better way of us capturing the feedback and responding? We’re now looking at ways of ensuring this info gets passed on and followed up by the right team/person, so themes and patterns can be identified and actions decided. How we communicate back to our users what we’ve done is equally important so we’re adding an obvious - ‘You Said, We Did’ board to complement the wall so users can ‘track’ the progress of their suggestions and comments. We could also look at the use of mobile boards to see if the location has a noticeable effect on the types of comments we’re getting.

But while we have a really good think about what the future holds in developing this resource further, in the meantime,  it ain’t going anywhere and one thing remains clear - the last thing any of us will be doing is ignoring the writing on the wall.

* Ballyregan Bob was arguably one of the best greyhounds to ever grace the racing circuit. So much so after his death in 1994 he was exhibited in the Natural History Museum in Tring.

**Lazy and out-of-date reference to Bolt’s predilection for the poultry-based morsels in the lead up to inevitable Olympic glory.
Posted by Anonymous
Email ThisBlogThis!Share to TwitterShare to FacebookShare to Pinterest
Labels: embedding ethnography, ethnography, feedback, feedback wall, graffiti wall, ux