“They retweeted me once - it was quite exciting!”

In September 2009, I was leading a small communications team for IT Services, and I'd had my own Twitter account for 9 months. As a team we were reviewing our approach to communication and saw that other university services were starting to use Twitter, so we decided to create an account for IT Services. We saw it as a new way to keep people informed of new services, alert them to any downtime, and raise awareness of security issues - phishing attacks and the like. We seethed inwardly when an occasional colleague gleefully dismissed Twitter to our customers, even as we tried to promote it (“I'd never use that”), and eventually we seethed outwardly too, which seemed to put a stop to it…


In 2011, the Library, Archives, and IT Services converged to become Information Services, and my communications team gained an extra member and became the Communications and Marketing team for all three services. The Library also had a Twitter feed, which had been operating since September 2010. At this point the Library had limited resource available for marketing activities, so the account was run by a group of interested people from different teams. This didn't always work well - with no defined responsibility for the account, some queries went unanswered, and the posting rates on the account varied hugely from day to day. As part of a review of relationship management activities, responsibility for the Library twitter feed was passed to us in the Communications and Marketing team, leaving us with two Twitter feeds to play with.

(As an aside, it's worth noting that this semi-outsourced style of working may not have been the best choice for our Twitter feed, but can be very effective in other contexts, so shouldn't be dismissed; our Instagram account is populated by eager photographers from different Library groups, and as such offers a broader picture - pun intended - of our resources.)

Fairly naturally, we fell into different voices for the two accounts; what we had to say on the IT account (downtimes, phishing alerts, new services) wasn't as easy to have fun with as the more varied topics on the Library account. Inevitably, we often retweeted from the 'other' account, and yes, we started talking to ourselves… 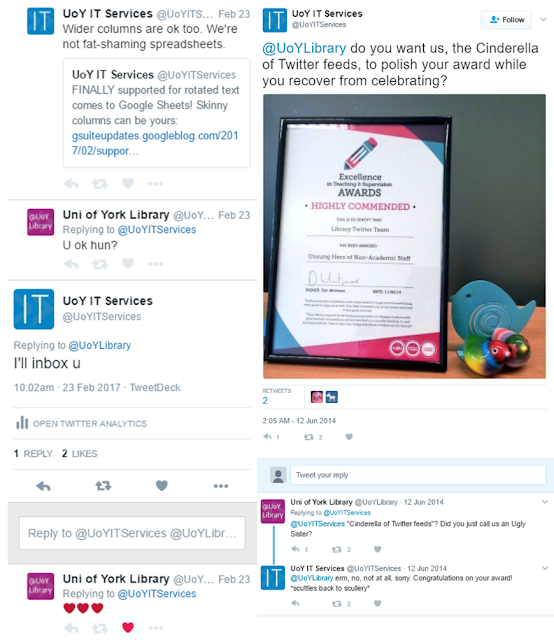 In the early days, we took a fairly concerted approach to building followers; we announced the Twitter feeds in newsletters, news items on our websites, and via the student union newsletter - the latter was especially successful. We added our Twitter name to printed materials, and included it in our email signatures, and colleagues were encouraged to do the same. Nowadays, people expect us to have Twitter so we don't have to work so hard at promoting it. Our focus is very much on user engagement, and we try to respond to all tweets, including negative ones; it's an opportunity to improve someone's experience, and turn around their perception of our service. When we engage with our users, whether it's with a well-chosen gif, a light-hearted reply, or supplying exactly the right information, we get more interaction which in turn helps to build our following. Any tweets with a feedback element are favourited and pulled into our monthly feedback report.

In 2014, the Library Twitter feed was nominated for an award from our Student Union, and were awarded Highly Commended in the Unsung Heroes of Non-Academic Staff category. Nominations were made by two of our student followers, who commented on the speed and humour of our responses, with one of them adding “they retweeted me once and it was quite exciting”. It was a very proud moment, with the added joy of champagne at the award ceremony.

Just an extension of the help desk?


We were clear from the offset, that we wouldn't be the digital wing of the IT Support Office or the Library help Desk. Our Twitter bios explain that we offer 'news and updates'. However, while it's easy to set your own parameters and guidelines for how the Twitter account will be used, but not so easy to persuade your followers to work within them. And that's understandable - if my supermarket make an error with my delivery, then tweeting them is quick and easy, and the same is true for anyone with a question or comment for us. In addition, Twitter acts as an early warning system; this is easiest to see with the IT feed where users alerting us to issues with wifi can be as quick as our own alerts, but it's there on the Library account too, letting us gauge the thermostat, both actual (“It's too hot in Fairhurst”) and metaphorical (“Why are there so many A level students in the Library? We need seats!”).


One way and another, we spend quite a bit of time working on our social media, and it's a key part of our communication approach, so it's important to evaluate its success. We use Twitter analytics, to assess engagements and impressions, and we use Google analytics to examine the traffic to our websites. But on a day to day basis, just getting a feel for it works pretty well too.


We didn't know when we set up these accounts how they would develop.Twitter is all about sharing and learning; we've learnt from those around us, and grown in response to our followers. We follow and retweet other accounts in the University and the city, and we also follow lots of library accounts - they're often funny and interesting (and we can steal their good ideas). Particular favourites are Liverpool Uni Library and Warwick Uni Library and, like everyone else, we have just a hint of a crush on the Orkney Library Twitter account.