Hydra is a digital repository software now being used by the library at the University of York. Prior to taking up a new role in 2017, our former Technology Development Manager Julie Allinson wrote this post about how we adopted Hydra, and more info on the project and its benefits.

York has been committed to providing a digital repository infrastructure since 2007 and, in 2008, chose the open-source Fedora Commons repository software to provide that infrastructure. The ‘F’ in Fedora stands for ‘Flexibility’ and it was this feature - the ability to tailor the system to our needs - that was a fundamental reason for our choice. Since 2007 we have built various applications on top of Fedora and are managing and providing access to somewhere in excess of 300,000 digital resources via our York Digital Library. We have built bespoke workflows for images, audio resources and more, and are now being harvested by our discovery layer, YorSearch. But requirements and use cases continue to grow and it is impossible, and inefficient, for one small team to continue doing bespoke development for all of them. For this reason we decided to adopt Hydra.

Hydra is built on top of a common framework - the widely-used Ruby on Rails Web application framework. Arguably more important than the technology platform, though, is the community approach. Everything about Hydra is out in the open - all code is on Github, documentation on an open wiki and discussion on google groups and and a Hydra slack channel that anyone can join. The core developers within the Hydra community come from a range of institutions and there is a clear mechanism for new developers to begin contribution.
In addition, Hydra has a set of ‘Partners’ and a process for joining as a partner.Hydra partnership isn’t a closed community, it’s a mechanism formally committing to Hydra and thereby contributing to the community, be it with code, leadership, testing or other contributions. York have already joined as partners and have been engaging in various interest groups and activities, like the Hydra Virtual Connect held in summer 2016.
These, combined, make it a very strong open source project.

Benefits of Hydra for York

Hydra is a mature, trusted and developing software platform on which we can build.

Hydra is used, and contributed to, by some of the biggest academic institutions in the world, including Stanford, Princeton, Oxford and Yale Universities.
Hydra and its associated technologies deliver a good proportion (perhaps 70%)  of what we need from our digital repository infrastructure and delivers that in ways that are designed to be extended and customised in a modular way.
Arguably, there is no off-the-shelf solution that can deliver our requirements for the management and access of a disparate set of digital resources.
There is a growing core of European, mostly UK-based, Hydra users who all want to work closely together to share development and expertise.
Help is at hand? Hydra has a large community of users and contributors - questions rarely go unanswered.
With a major upgrade for Fedora Commons looming, Hydra helps smooth the transition, providing a standard interaction to Fedora irrespective of version and offering a chance to review and cleanup as we migrate.

Hydra at York will allow us to:


Don’t we do all of this already?

To some degree, yes, our existing digital repository infrastructure offers many of these features already but the maturity and community-support offered by Hydra will allow us to deliver more functionality, more efficiently and in a more supported way.

It has always been central to our repository design to facilitate different routes for ingesting content. Hydra will certainly help with this, providing a standardised model for defining repository interaction. Similarly, allowing our resources to be surfaced via many interfaces is critical.
The diagrams below attempt to graphically illustrate our new approach. Green indicates open source components, grey third party tools and pink is our own code. Notice that there is more green than pink, this is important for us as it means we are focussing on what makes us different whilst benefitting from where we are the same. 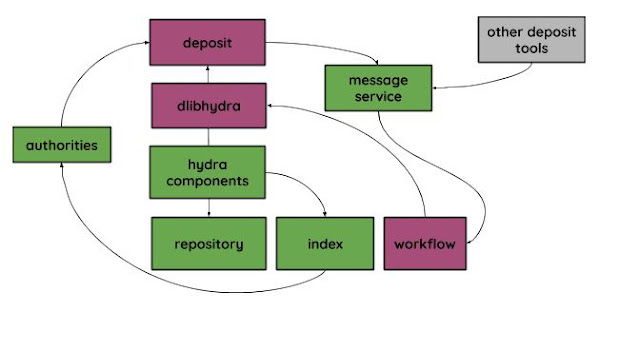 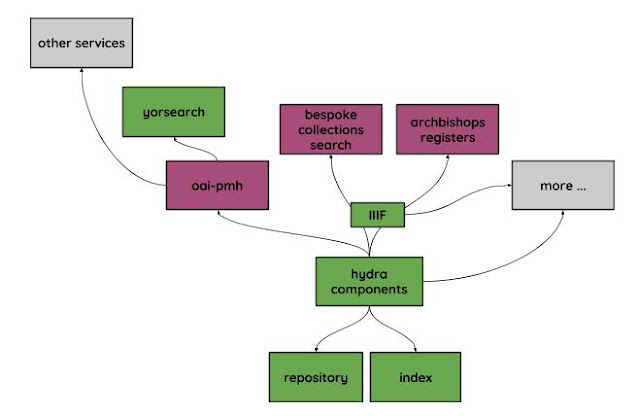 In addition to the core Fedora / Hydra components, there are many allied tools and projects we can benefit from. Blacklight, for example, is a ‘discovery platform framework’ that we can use within our Hydra applications and beyond, for example to power our new HYMS unified search facility, coming in 2017. Spotlight is a Blacklight-based project that allows curators to create attractive, feature-rich websites that highlight digital collections, and Geoblacklight is another project that, this time, gives us powerful geo and mapping features. The International Image Interoperability Framework (IIIF) is a relatively new standard for exposing and using image collections. It has gained huge uptake across the cultural heritage section and we have already made use of the standards in our Archbishops’ Registers project, exposing ‘manifests’ to describe the registers for use in other IIIF-compliant image viewers. IIIF is growing, too, adding support audio and video, and expanding the range of tools and viewers available.
Also, beyond the Hydra ‘core’ components are projects and implementations from which we can benefit. Sufia and Curation Concerns, for instance, give us rich institutional repository deposit and access functionality out of the box, with easy extensibility to our own needs. The Avalon project provides a fully-featured Audio and Video management and access application, and Michgan’s Fulcrum. Plum is delivering rich digitization workflow functionality, including IIIF support.
With so much current activity, Hydra offers us an embarrassment of riches.